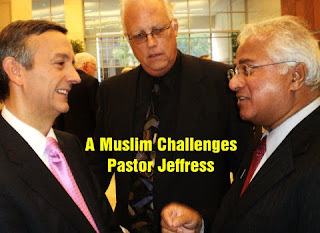 Mike Ghouse Challenges Pastor Robert Jeffress, Pat Robertson, Terry Jones, Fred Phelps and other Pastors who are misquoting Quraan and have not made any effort to understand, but too quick to call it evil.

We owe it to our country, we owe it to our nation to build safe and secure America, where no American lives in fear, anxiety or discomfort.
Video presentation

Richard Ray of Fox4 News interviewed me today about Pastor Jeffress and the Quraan at 11:00 AM this morning, however due to time constraints, or other reasons they have edited out the critical points about killing the infidel and Quraan Translations. I will recreate that interview and post it on the web in a few days, right here.

The challenge is simple; I will present the right translations of the Qur'aan to Rev. Robert Jeffress in his congregation and challenge him to find 3 evil things about Quraan, if he does, I will go work for his ministry, if he does not, I ask of him to retract the thoughtless cavalier statements he made about Islam and Quraan, and take up the challenge of becoming a peace maker.

Thanks to the Imam Zia Shaikh, other Imams and friends for their encouragement to challenge the myths and ask the mis-informed to be informed. Thanks to the Islam bashers for telling me what is it that bothers them, they have time and again given me a list of about 60 verses, and I have made serious effort to address them most directly at: http://quraan-today.blogspot.com/ I have dealt with some of the Islamophobes who have made their business by maligning others including Islam, in this case. Look at their websites, they shamelessly ask for money, people should seriously debate if their money is going to bring peace or chaos.

Whether it is Pastor Jones, Jeffress, Phelps or Robertson, the media has failed to nail down the exact words or phrases that cause them to make such divisive declarations, and the unfinished business is frustrating the public.

America needs peacemakers who can boldly clarify the un-truths and myths about each other for the sake of peace. We owe peace and security to each one of the 301 Million Americans, our efforts ought to be directed so every one us can live without fear, without harassment and without prejudices. My question to Pastors Jeffress, Jones, Phelps, Robertsons and their likes is this; Didn't Jesus pray and worked to create the kingdom of heaven on the earth, so all of us can live freely?

Some 2000 years ago, Jesus delivered the sermon "Blessed are the peace makers" on Mt. Beatitude, I was there and felt the power of that statement. I walked where Jesus walked on via Dela Rosa; I was baptized in the river Jordan where Jesus was baptized. Symbolically, I accepted Jesus’ message to become a peace maker by drenching myself in the holy water.

The role of people of religions is to mitigate conflicts and nurture goodwill. I ask Rev. Robert Jefferess, Rev. Pat Robertson, Rev. Fred Phelps and Rev. Terry Jones to walk the journey of peace with me.

TV Clip from Fox - the links to 2 other TV interviews on NBC and FOX will be added later on.

DALLAS - First Baptist Church of Dallas Pastor Robert Jeffress said he has no regrets about calling Islam an evil religion. But on Sunday he gave a warm welcome to a group of Muslims visiting his church.

It was an unusual meeting of the minds. A pair of Muslim leaders showed up unexpectedly wanting to talk to the pastor, not sure what kind of reception they’d get.

“We have some very special guests here this morning. Leaders, members of the Islamic faith in Dallas and I want you to join me in giving them the warmest First Baptist welcome you can,” Jeffress said to his congregation.

Muslim Mike Ghouse was part of that small delegation and afterward met with Jeffress to discuss the Quran.

“He asked us to stand up and there was a good welcome. It was beautiful. I really liked that,” Ghouse.

He is convinced that Jeffress and most Americans have only read mistranslations of the Quran, where ugly language about Christians and Jews has been incorrectly inserted.

“What he said about the Quran and Islam I agree with him. He has read the wrong translation. To find the truth, to be peacemakers, we have to find the truth for the sake of a secure America. His statements are divisive and offense,” Ghouse said.

A study last month by the Pew Forum on Religion and Public Life found that over the past five years the percentage of Americans with a positive view of Islam has dropped dramatically from 41 to 30 percent.

Jeffress said he enjoyed his meeting with Ghouse and the others, but still believes he has read an accurate translation. He expresses no regret for what he’s said about the religion.

“I have to regrets at all. I think some of my statements have been mischaracterized simply because the whole statement wasn’t given. I don’t believe most Muslims are terrorists. I don’t think most Muslims oppress women. But there is something within the religion of Islam itself that I believe incites violence,” he said.

Jeffress said he thinks he can disagree in a loving and kind way.

Ghouse and the others involved in the meeting said they’d like to meet with Jeffress again in the future to have a deeper discussion.
# # #

I will continue with the points later.

Mike Ghouse is a speaker on Islam and Pluralism offering pluralistic solutions to the media and the public on the issues of the day, his work is expressed in 22 blogs and 3 websites listed at http://www.mikeghouse.net/
Posted by Mike Ghouse at 6:14 PM