God loves those who forgive often and God loves the least who are arrogant. Everything God says in Quran is demonstrated by the prophet.

A few Muslims believe they have to defend the prophet, they are wrong, he is beyond all defending, same goes with God, he protects us and not vice versa.

Here is a list compiled by Muhammad Yunus about how forgiving the prophet was.

That was when he was in Mecca - the first 12 years of the revelation when he was not in a position to protest let alone revenge.He bore all these charges and insulting remarks with patience and without any protest and continued to love his people (42:23)

Come Medinite period that saw the Prophet rising in power day by day and becoming the chief arbiter (Civil Head) of Medina who could punish anyone he wished, he remained no less forgiving:  :

The Prophet forgave those who deserted him on way to a battlefield (Uhud) by saying: if they knew how to fight, they would have followed the Prophet (3:167).

The Prophet forgave those of his followers (3:159) who defied his orders in the battle of Uhud and ran off for booty at a crucial moment in the battle (3:153) leading to the defeat of the Muslims:

He forgave all his Meccan enemies upon integration of Mecca.

He forgave the defenders at the Trench Siege who took excuse of him and left the defense line.

He forgave the followers who declined to join him in his most risky mission to the first pilgrimage that ended in the Hudaiyba Peace Treaty.
Posted by Mike Ghouse at 10:30 PM 1 comment:

Quran is for the entire humanity, but the Hilali Khan/Mohsin Khan duo's translation has reduced it to the exclusive book of Muslims. If a Jew, Christian or a Hindu were to read it, they have every reason to fear Muslims and the "Muslim God " who teaches hatred towards them.  All you had to do to acquire the free copy of this book was  to call 1-800 number and they would send a free copy of the Quran, I have no idea how many copies are out there in the hands of innocent people,  we can check the boasting emails or news letters proclaiming how many million copies were distributed.  A lot of damage was done.  The good news is many of the mis-translation are fixed since 2012. 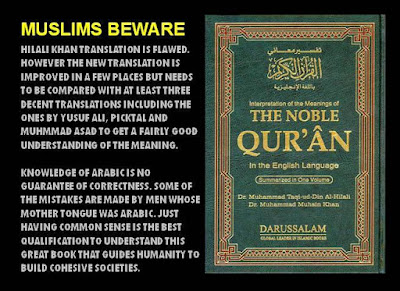 Hilali Khan and Mohsin Khan Duo as great scholars. They mis-translated the Quran around 1924, and as Muslims blessed with the courage to speak, we have to disagree.
Let us not elevate any human’s words to be on par with God – men like Hilali Khan, Mohsin Khan, Tamiya, Kathir, Banna, Qutub, Maududi, Shah Waliullah and other fallible humans have made several mistakes. We should not give their word equivalency to God’s word.

Whatever their intention was, these men have messed up the translations and interpretations of Quran. The brunt of Islamophobia that we are dealing with today was mothered by their work.  Indeed, the Spencers, Gellers, Baghdadis, Bin Ladens and Awalakis believe in that version of Islam.

Full article will be out in a few days and a link will be provided.


Mike Ghouse is a Muslim thinker, write and a speaker, and much of his work is published in Huffington Post, Dallas Morning News, Arab News, New Age Islam and several other periodicals and at www.worldMuslimCongress.com
Posted by Mike Ghouse at 10:29 AM 1 comment: