The first Quran was translated in the year 1142, and it was commissioned by the European Kings to Paint Islam as a bad religion, and they frightened their subjects that Muhammad was going to slaughter the people of Europe if they don't stand up against the advancing Arab armies.  The work was carried out by the French Abbey for a fee.  They coined word the word "Mohammedan" religion for Islam.

It is a big story I would like to tell, as it is easier than writing it out. Please read the full story with many videos and write-ups at www.QuraanConference.com.

Quran is a book of guidance in building cohesive societies where no human has to live in fear or apprehension of the other; it is as simple as that.  I usually refer to at least 5 different translations to get the essence of a single verse, and of course, our formula to understand the Quran is to read three verses before and three verses after a given verse to understand the context and meaning behind the verse.

However, every faith including yours has a % of people who do things that go against the very teaching of the faith they claim to espouse. That is an insignificant number and less than 1/10th of 1% of any group.

Over the years, I have collected about 20 different translations for reference.  A few are in this picture.  I have also visited the Library of Congress and checked Jefferson's copy of Quran translation by George Sale.

You may like this article in Dallas Morning News; 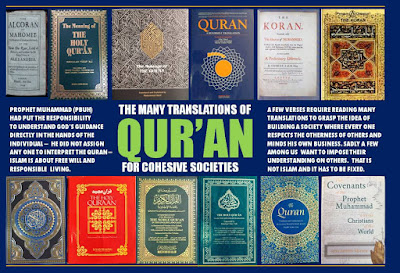 In defense of Islam, pursuing a civil dialogue
http://www.dallasnews.com/news/columnists/steve-blow/20100919-In-defense-of-Islam-pursuing-9397.ece

By Steve Blow, sblow@dallasnews.com Published 19 September 2010 02:28 AM
Over and over you hear it said: If Muslims oppose terrorism, why don't they stand up and say it?

If that has been you, Mike Ghouse ought to be your hero.

It is hard to imagine that anyone has worked harder than the Carrollton resident to demonstrate the peaceful and moderate side of Islam.

And that effort includes personally visiting Dallas' First Baptist Church last Sunday just to put a friendly face on the "evil, evil religion" that the Rev. Robert Jeffress denounced a few weeks before.

"It was wonderful," Ghouse said of the visit. "We were so warmly received."
He hopes a quick chat with Jeffress will be the start of a deeper discussion about Islam and the importance of respect between religions.

"I want to have a dialogue with him, not to say he is wrong but to share another point of view," Ghouse said.

The 57-year-old Muslim was born in India and has lived in the United States for 30 years. He owns a small property management firm. But most of his day is devoted to building bridges between people of different faiths.

"It is my passion," he said in his distinctive raspy voice.

He has been a guest a dozen times on Sean Hannity's TV and radio talk shows. "I don't like the way Sean cuts me off, but I have to honor him for giving the American public a semblance of another point of view."

Ghouse said he can understand fear and criticism of Islam because he went through a time of similar feelings. As a teen, he was troubled by passages of the Quran. He called himself an atheist for a while.

But he said deeper study led him to realize the Quran had been purposely mistranslated down through history.

Later, Muslim leaders produced another translation to inflame Muslims against Christians and Jews.

"It was all for politics," he said.

Ghouse said he hopes to present Jeffress with a modern, faithful translation and challenge him to find evil verses.

"If he can, I will convert. I will join his church," Ghouse said. "If he can't, I will call on him to retract his statements and become a peacemaker."

Ghouse acknowledges that deep problems persist within Islam. "Three steps forward, two steps back," he said with a sigh.

And he agrees that mainstream Muslims have not done enough to counter violent images of their faith.

"That is very true," he said. "But part of it is that many Muslims have given up hope that we will ever be heard."

He said repeated denunciations of terrorism seem to fall on deaf ears.

And some efforts have backfired – like the proposed Islamic information center in New York. He said it should be hailed for furthering the moderate Muslim cause.

Instead, it has deepened hostility toward Muslims.

I have been astounded by the amount of anti-Islam propaganda that circulates via e-mail. Tons of it has come my way in the last few weeks.

One theme is that people like Mike Ghouse can't be trusted, that Islam encourages deception.

But Ghouse says actions speak louder than words. And he points to elections in Muslim nations.

More than half of Muslims live in countries with some degree of democracy. And time and time again, Islamist parties are overwhelmingly rejected in favor of secular, mainstream parties.

"The religious parties don't get more than 3 percent of the vote," Ghouse said.

Polls show deep mistrust of Muslims. "But the most important question in those surveys is: ‘Do you know anything about Islam?' " Ghouse said. "Most people say no."
What keeps him going is faith in Americans, he said.

"The majority of Americans, if they know the truth, they will change their minds." 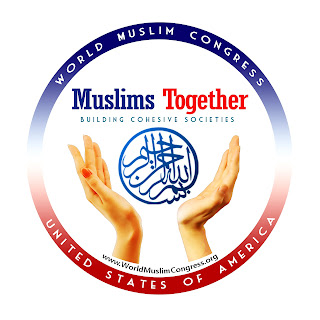 # # #
www.MuslimSpeaker.com
Mike Ghouse is a speaker, writer, thinker, futurist and an activist of Pluralism, Islam, India and Civil Societies passionately offering pluralistic solutions on issues of the day.
Posted by Mike Ghouse at 3:29 PM No comments: