Since the beginning of Islam, there have been debates as to what constitutes moon sighting. Some interpret that there has got to be a minion to declare that they have seen it themselves with their own eyes, while others do not accept it unless they have seen it themselves. It is also acceptable if the moon is sighted elsewhere, but now, each group has to have their own moon sighting. In the United States, there is an organization that monitors moon sighting and announces it in advance. Over the millennium we learned to accept and respect the otherness of other.
Politics plays a crucial role in our Temples, Synagogues or Churches, Mosques are no different. A few scientifically-inclined-Muslims have adopted NASA’s calculations believed to be precise. However, four different traditions are operating concurrently; i) Strictly Calendar, ii) NASA  iii) Sighting with bare eyes and iv) sighting by others in the community.
The NASA-oriented and the Calendar-group miss out the fun, joy, and exhilaration of waiting and watching the needle thin moon on the horizon. The whole family gets out on the rooftops, or higher grounds, some even climb electric poles, and a few will drive out where they can see the sky without obstacles, kids would climb on parent’s shoulders, and a few go from place to place shouting in excitement, did you see it? It is like the belief in Santa Claus, Angels, and other myths, each tradition fulfills one’s emotional needs and every one becomes sentimental. After all, if celebration does not have the excitement, it is not a celebration.
America’s spirit of freedom touches every soul, no matter what religion or tradition they follow. American Muslims are no different, they prefer to have a pre-set date to start fasting and the celebration called “Eid” pronounced as Eeed as in Eeel. The idea is for them to take a day off from work or get an optional day off for their children from the schools. Always, the joy multiplies when the family and friends celebrate it together. They prefer to start on a pre-set date and trust the calculations.
The conflicts are the same everywhere on the earth. Each group subscribes to one of the four systems mentioned above. America is no different; you will find celebrations on one or three different days in any given city, the Sunnis, being the largest group has the greater division within, while the Sufis, Shias, Ismailis, WD Mohammad, Bohra and Ahmadiyya follow the pre-determined dates.
The consensus may be attributable to having central spiritual leadership in all groups except the Sunni. However like the American Public wishes to see the Republicans and Democrats drop the party lines and focus on what is good for America, the Muslims also wish they could celebrate the Eid on one single day. It ain’t going to happen, it is human to differ. It is against the spirit of Ramadan to denigrate, diminish and devalue other practices.
The essence of Ramadan is to become humble, simple and free from ill-will, anger, meanness, and hate. Let’s fill our hearts with goodwill and honor Ramadan by saying “Eid Mubarak” or Happy Eid to everyone who celebrates on a different day in the same town. The essence of Ramadan is joy and let’s not prick the bubble; God has not signed a pact with anyone behind other’s back to favor one and disfavor the other.  Let’s allow God to be an honest God who is just, kind, merciful and loving as Quran says. Let’s rejoice the differences of interpretations. If you want to celebrate every day, go to every celebration.
In the spirit of Ramadan, I pray that Ramadan gets into our hearts and minds and make us embrace all factions of Muslims without undermining their tradition and further pray that we treat every human on the earth with dignity, respect, and care.
The Shia-Sunni conflict we see in Iraq is new to both groups of Muslims, conflicts have always been there but the violence in conflict took birth after we (The Americans) invaded Iraq and sowed the seeds of division. Shamefully, the Shia and Sunni played it out. Our short-sighted foreign policy is pitting Saudi Arabia against Iran. Iran is not a threat to anyone, it is the false propaganda by Netanyahu, and salesmanship of defense contractors to sell Arms to Saudi, and the stupid Saudi monarchs have bought the idea, I wish we can sell peace and democratic education that will benefit us all in the long haul. I wish, the leadership of these two nations make a bold move and meet in Singapore and hash out the differences.  I also wish in the spirit of Ramadan, the Pakistani people will wake up and correct the ugliness in their constitution that shamelessly discriminate Ahmadiyya Muslims. Above all, I wish Muslims chose to follow the foundation of Islam; Amin, that is caring for every human being and seeking peace and harmony by respecting the otherness of others.
That is indeed the wisdom expressed in Qur’an, Al-Hujurat, Surah 49:13: “O mankind! We have created you male and female, and have made you nations and tribes that ye may know one another. The noblest of you, in sight of God, is the best in conduct. God Knows and is Aware of everything you do.”

MUSLIMS MUST DO THIS

I urge Muslims around the world to take a minute to stop and appreciate the men and women who serve our nation, police, firefighters and others who are out there for the safety of individuals and families.  I have done this time and again, and I always remember the Louisville experience, where the police officer asked me to forward the email to him, asking Muslims to appreciate them, and after the Eid prayers, he had forwarded it to many police officers.

Mike Ghouse is committed to building cohesive societies and offers pluralistic solutions on issues of the day through the Center for Pluralism and World Muslim Congress and its affiliate sites including www.RamadanNews.com and www.MuslimSpeaker.com and www.InterfaithSpeaker.com 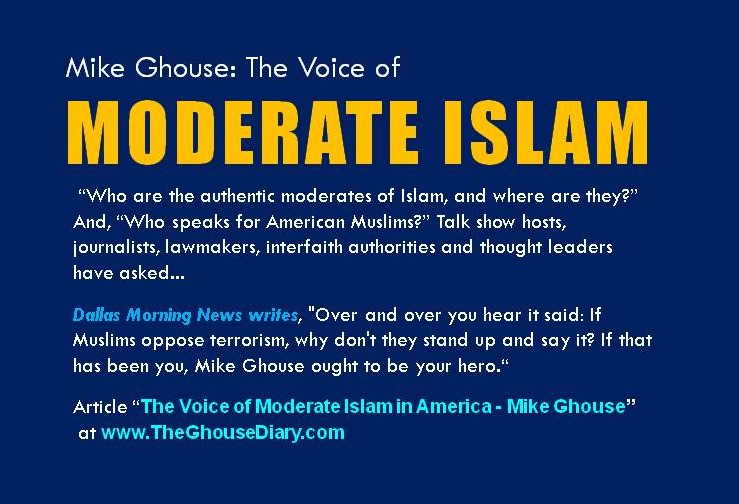 Posted by Mike Ghouse at 3:31 PM No comments: