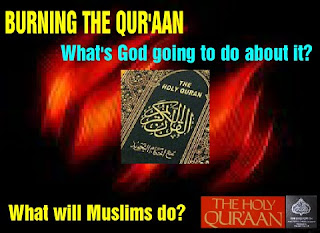 Imam Zia Shaikh and Mike Ghouse
The world will perhaps watch Terry Jones, senior pastor at Dove World Outreach Center in Florida burn the Quraan on his Church grounds on September 11, 2010. Obviously this incendiary act is intended to provoke reaction from the Muslims.

The Majority of Muslims would act the same way as the Christian or other Majorities in other faiths; do nothing. However, “silent no more, speak up” is the new paradigm among Muslims. They had enough of the blame of 9/11 placed on them while the criminal is at large. The Muslims want Osama Bin Laden caught and punished as much if not more than the families of the victims of the 911 do, their loved ones have journeyed to paradise and resting in peace. No doubt bigotry is germinating from a miniscule percentage of Americans against fellow Americans, the majority of Americans have not felt the need to stop what is un-American; to treat fellow Americans with suspicion and blame for things they have no part in it.


The issue can be framed in two questions.

What is God going to do about it as Pastor Jones burns the Quran?
The simple answer is “Nothing!”

Muslims do not own Quraan; it is a book of guidance for those who chose to be guided. Indeed, Qur'aan starts with the word "God of Universe" Al-Fatiha (The Opening) 1:2 “All praise is due to God alone, the Sustainer of all the worlds” and ends with addressing humanity as a whole again, An-Nas (The Mankind) 114:1 SAY: "I seek refuge with the Sustainer of men.”

It is understood that God, the cause behind creation of life and matter belongs to all of us. No one owns him or any group has exclusive favors with him over the other.

God knows every thing we do, and neither Osama Bin Laden nor Pastor Jones will go scot free, every one of us has to account to ourselves in our solitude and again on the day of reckoning.

Quraan, 14:4, and never have we sent forth any apostle otherwise than [with a message] in his own people's tongue (language), so that he might make [the truth] clear unto them; but God lets go astray him that wills [to go astray], and guides him that wills [to be guided] -for He alone is almighty, truly wise.

God is not going to do a thing, he has blessed us with free will and encourages and guides us to do good and holds us responsible when we fail.

What are Muslims going to do about it?
They will pray for the well being of the pastor.
That is what Prophet Muhammad (pbuh) did when the miscreants pelted rocks at him, instead of getting even with them, he asked his associates to join him and pray for their well being. Angel Gabriel offered help to go get those rascals, the prophet said no to him and instead prayed for their goodwill. He believed that there is goodness in every human soul and we have to appeal to it. He chose the non-violent way of goodwill nurturing.

Most Muslims will follow that beautiful example of the prophet; it is one of the peace models he presented for the world to follow, just as most Christians would follow the teachings of Jesus Christ and not burn the Quraan. There will be fringe elements among Muslims who will mirror Pastor Jones. You can count them to be no more than 1/100th of 1% of the population.

Quraan, 14:12 and how could we not place our trust in God, seeing that it is he who has shown us the path which we are to follow? "Hence, we shall certainly bear with patience whatever hurt you may do us: for, all who have trust [in His existence] must place their trust in God."

Let Pastor Jones burn the Quraan if he so chooses, however, we request him to read the right translations and understand the verses in their right context. There are at least 18 decent translations against the two he may have read and bases his judgment upon. We will be happy to sit with him and clarify any thing he may have possibly misunderstood.

Qur'an, Al-Hujurat, Surah 49:13: "O mankind! We have created you male and female, and have made you nations and tribes that ye may know one another. The noblest of you, in sight of Allah, is the best in conduct. Allah Knows and is Aware."

We have to consciously create institutions and systems that will become a catalyst to a positive change and bring about cohesive functioning of the society. It is our duty to keep law and order and faithfully guard the safety of every citizen. As an individual, I cannot be safe if the people around me aren’t, it is in my interest to seek peace for all of us.

We have a monumental task to repair the World, and we will do our part in working towards a World of co-existence, one person at a time. We are committed, and now help us God. Amen.

Imam Zia Shaikh is the resident scholar of the Islamic Center of Irving, Texas and a Hafiz-e- Quraan. Mike Ghouse is a speaker on Islam and Pluralism offering pluralistic solutions to the media and the public on the issues of the day, his work is expressed in 22 blogs and 3 websites listed at www.MikeGhouse.net
Posted by Mike Ghouse at 6:08 PM